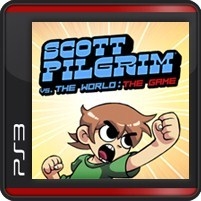 Scott Pilgrim vs. The World (PSN)

SCOTT PILGRIM IS ABOUT KISSES AND KOS. Scott Pilgrim is a lovable loser and the best fighter in the province. He is in love with Ramona Flowers. But she has baggage! To get the girl, Scott must defeat the League of Ramona’s evil exes. Be prepare for some serious action...

PLAY AS OR PLAY WITH YOUR FAVORITE CHARACTERS