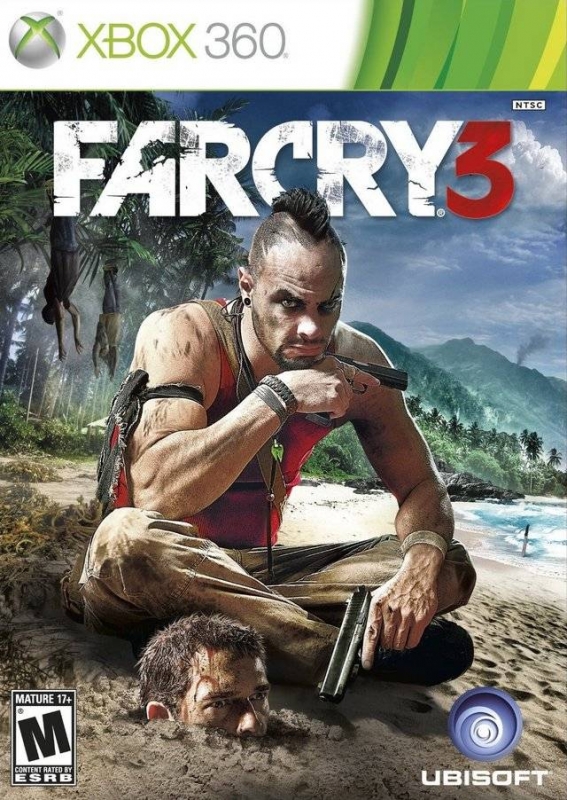 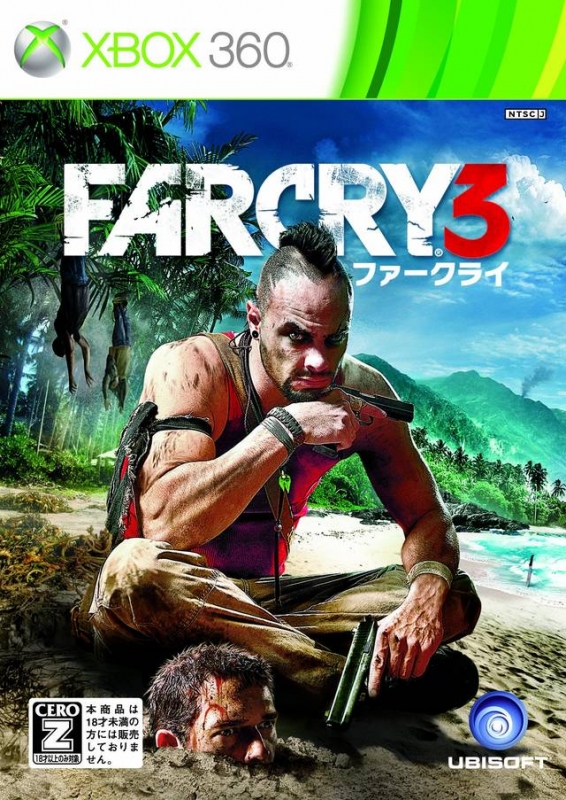 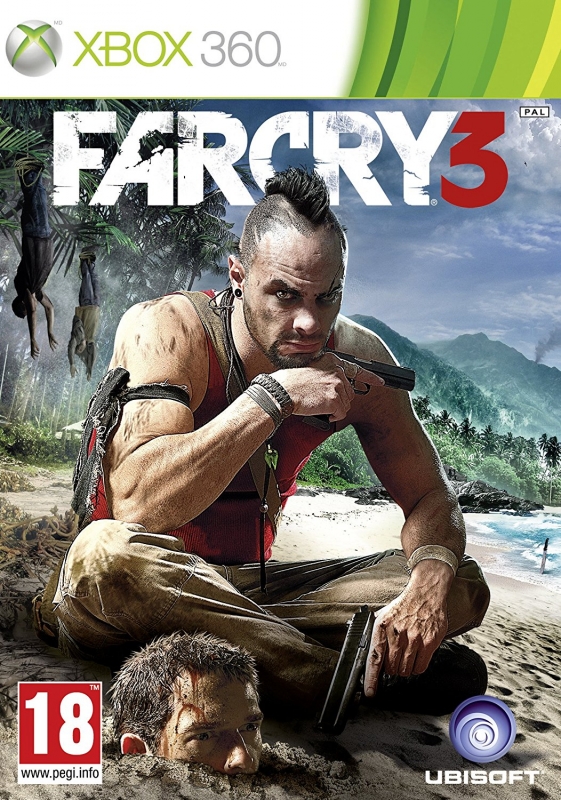 How many sticks of C4 are necessary to kill a bear?

This and other questions fill your mind as you sneak slowly through the undergrowth towards a heavily defended hill-fort, its corrugated iron defensive walls and stray barrels glistening as dawn emerges in the distance. You remove your camera - a rudimentary observation device - and scout the perimeter. One, two, three enemies scan up, labelled according to their role. Only once you have given the fort more scrutiny with your sniper rifle do you spot the fourth soldier relieving himself next to the alarm, ready to call reinforcements at the first sign of trouble. A growl is heard to your left, but you ignore it; the island teems with wildlife, so this is no unexpected event. You dispatch the first guard with an arrow, the second with a grenade as he leaps towards a machine gun guarding the entrance. As you lean forward and emerge from the growth into a sprint a figure springs from the side and pins you to the floor. A tiger bites at your neck as you resist fiercely, punching it away before stumbling to your right. The tiger spins, ready for its next assault as you feel the shred of gunfire in the near distance. An alarm rings around the fort, shrieking through the chaos, reminding you that you have no more than a minute to clear the area before others arrive. A quick look through your limited inventory finds the solution: flame-thrower. Ten seconds and a fledgling forest fire later you have yourself a new base, freshly loaded with allies, cars and weapons. Job done soldier.

Far Cry 3 begins with you, the hapless and apparently terrified reveller Jason Brody, locked in a cage after being captured with your particularly annoying frat-friends by a local pirate lord named Vaas. An escape featuring his brother goes awry, yet Jason makes it out of Vaas' camp alive and into the wilderness where he soon becomes the figure-head of a local anti-Vaas movement. The narrative sweeps through rebellion, hallucinogenics, voodoo magic and friendship, anchoring the game well whilst laying on some quality set pieces; the mission which has you burning marijuana fields whilst Skrillex's 'Make It Burn Dem' blares in the background is a blazing classic. Although interesting, the story does have apparent contradictions; for all that Jason mutters and appeals that this all beyond him, everyone makes it clear how heroic and brave he is whilst he shoots first and asks questions later like a natural. Are we meant to believe that this party-hardy frat kid was a leashed super-soldier, able to fight mercenaries, craft ruck-sacks, wield weapons and perform all sorts of miraculous feats as the game tries to suggest his brother is the more capable hero? It is easy to see why it fits as a narrative device, and why it would add to the otherworldly feel of the game, but it just doesn't quite work when the action revels in the impossibility of it all.

The narrative does make up for these short-comings in other ways, however. Jason's  friends, 'rich kids with rich parents' as Vaas describes them, are immensely annoying and self-gratifying, meaning that they are very, very hard to empathise with. As the story progresses, this becomes less likely to be poor character framing and more a form of self-reflection; are you saving them because they are your friends, or are they, like you, a means to an end? Vaas himself is a fantastic bad guy, dripping with menace, wit and threat; think Idi Amin in 'The King of Scotland' or Ude Hussain in 'The Devil's Double' for similar characters. His psychotic personality is doubled with an undoubted intelligence, giving him an air of undoubted danger that many gaming villains lack. By proxy, you fear his private army, helping to sustain a tension in Far Cry 3 that barely relaxes even when the main plot is the last thing on your mind.

If the plot is the framework from which to hang the experience, the location is the real star of the piece. The tropical island, situated in the pacific, is one of gaming's truly great environments; unfathomably large, hostile in temperament, nature and population, it is a pleasure to explore its sandy hills, vast vistas, sunken lairs and ancient ruins. It is a new high in gaming environments, and it is a testament to Ubisoft Montreal that they managed to create such a miraculous area on this generation of consoles. In other games, side-quests can be a chore. Here, they are an arresting pleasure, not just because of their content but because you can search a little bit more of the island. Despite its size, there's a surprising variety of areas on show with few signs of copy and paste locations except for a couple of huts. Dotted throughout the map are towns and forts which must be captured to allow for safer passage and new quick-travel zones. However, such is the quality of the environment that more often than not you will choose to drive or wander the distance, merely for the thrill of the journey as much as anything else.

There is real life to the landscape that many have attempted but failed to realise; it genuinely feels like a living, breathing world, which you are merely a part of rather than the epicentre. Gun battles rage in the distance, animals hunt and graze, locals go about their daily lives and guards banter as you make your way around the island. The perspective really helps in this regard. It is first person in its truest sense; you can see your hands turn the wheel as you speed along in a variety of cars (driving has always been a Far Cry highlight), reach out and soften a fall as you shake yourself up, whilst the platforming sections, including the map-revealing radio towers, are some of the finest examples of first-person movement in any game.

At its heart, Far Cry 3 is an action-RPG, based around a points-based and collecting structure re-enforced by terrific and chunky combat mechanics. Actions earn points which unlock new manoeuvres and abilities. Weapons are purchased from vendors or unlocked with the discovery of new areas through the radio towers, whilst upgrades to loot bags, holsters and the like, and the various syringes used for hunting and combat are earned by crafting material, whether plants or animal hides. This form of progression works well; it would be difficult to get far in the game without new skills and better weapons, thus compelling the player to explore, hunt and complete side-quests, and generally encouraging them to experience all that Far Cry 3 has to offer. Whether stealthy or balls to the wall, combat is thrilling and great fun. It never feels unfair, nor too easy; enemies are reasonably intelligent, following up sounds and tracing movement, but any instance of you being out-numbered and cornered is likely to come from your own carelessness than any other reason.

In tandem with the single-player adventure there are fully fledged competitive multiplayer and co-operative modes, both online and local (brilliantly). The co-operative mode is more frontal than the single-player (i.e. there is little room for stealth-based gameplay, unfortunately). Featuring a unique storyline and a particularly convincing Glaswegian (read: spouts a dictionary worth of expletives), the difficulty is ramped up considerably; enemies spawn repeatedly, ambushing you from all different directions including appearing right in front of your face. This is annoying and slightly puzzling compared to the rest of the game, where this rarely happens, but doesn't detract from a solid and generally fun, if sometimes repetitive, addition to the experience. Better to have than to not, as they say. The more conventional multiplayer is familiar in tone and style to the Call of Duty franchise, but with some tidy twists. Items can be gathered for de-coding, which when complete offer experience points and new weapons or features. Mid-match, players can use shouts to bolster the ability of other players, or to improve their health among other things. The engine is solid and combat neither feels unfair or unbalanced; shots hit where they are supposed to. There are, however, severe issues with lag; I played it in several different locations to check if it was my internet, but the same problems arose every time.

Far Cry 3 is visually one of the most stunning games of this generation, of this there is no doubt. The island is lush and beautiful, whilst main characters are deliciously animated and convincing in both stance and movement. Less attention has been paid to lesser figures, with those requesting side-quests often little more than bland talking heads, whilst allies and foes in the field all appear to use the same character model. Still, it is testament to the solid and satisfactory engine that despite these flaws the player is still swept away by the stunning beauty of the environment. There is also no slow-down, though it is worth installing the Xbox 360 version for the greater draw distances. The living, breathing environment would be nowhere near as convincing without a decent soundscape, and here Far Cry 3 once again excels. Animals bleat in the distance, locals greet you as you pass, pirates talk between themselves and the trees swish slowly in the wind as you crawl your way through them. The vocal talent on show for the main quest is excellent too, well-pitched between convincing menace and over-the-top recognition of the absurdity of the situation. It is clear that a lot of time and effort has gone into making Far Cry 3 feel right for the player and the situation; by coupling a great eye for detail with incredibly high production values they have succeeded with aplomb.

2012 has been a good year for free form games, with two exceptional, if vastly different styles adding great depth to the sub-genre. While Dishonored is about moral choices, Far Cry 3 is about stylistic choices. Whereas Dishonored promised freedom with a tight, controlled area, Far Cry 3 offers option upon option in one of the most thrilling environments to ever grace gaming. Like Dishonored, Far Cry 3 emphasises stealth but this can instantly be disregarded for the thrill of grenades and the mockery of your opponents. Unlike Dishonored, Far Cry 3 could conceivably last you years. A superb and layered single-player adventure with a deceptively driven narrative and oodles of side-quests is paired with a solid co-operative mode and excellent multiplayer mode that delivers what is one of the packages of the year. Although Far Cry was good and its sequel decent (if somewhat underwhelming), Far Cry 3 is so, so far ahead of its predecessors and most of its competition that it is almost embarrassing to have to compare them. The only shame is that Far Cry 3's late appearance means it will likely miss most game of the year contests. Otherwise the results could have been very different - it is that good.

This review is based on an Xbox 360 version of Far Cry 3.