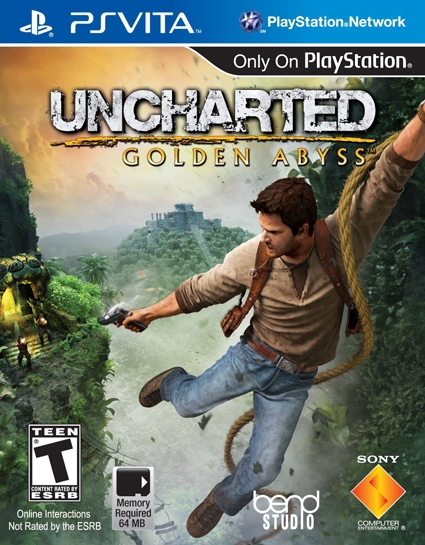 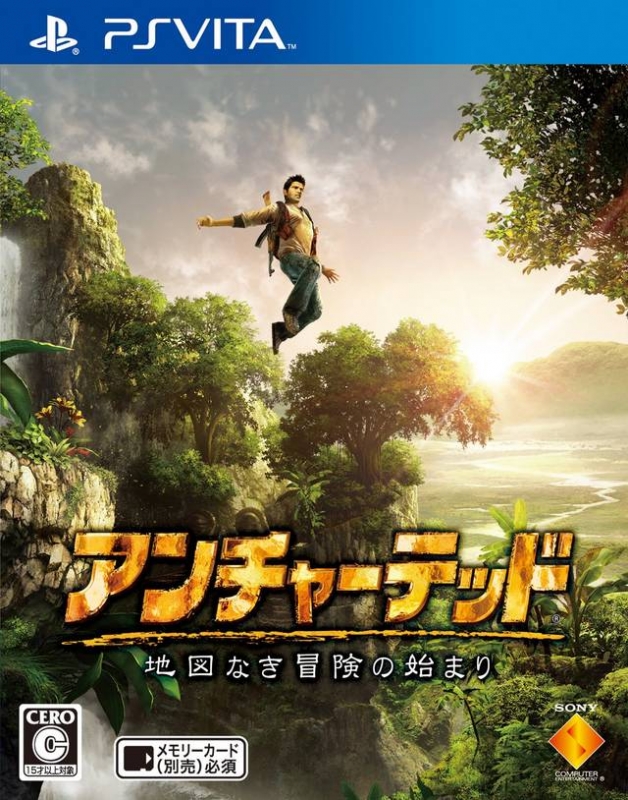 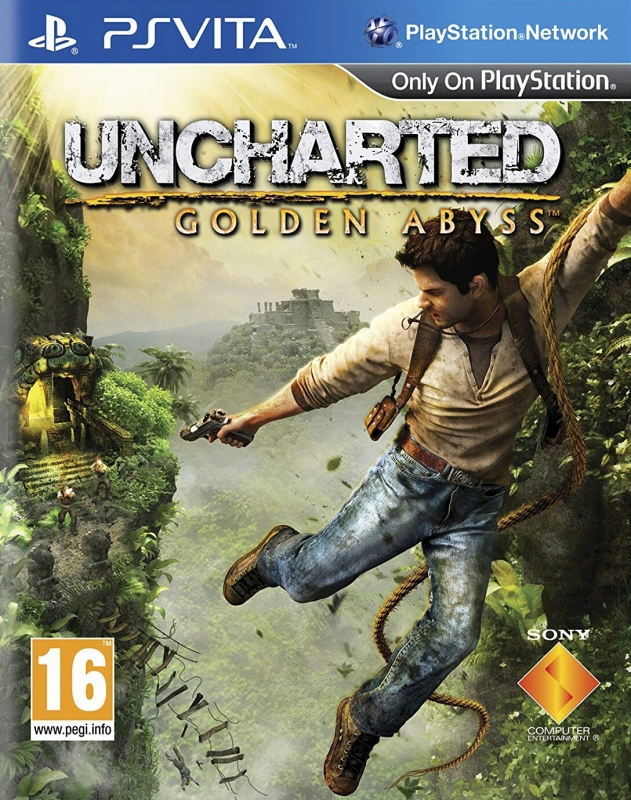 Uncharted: Chizu no Bouken no Hajimari

Is Sony’s golden boy the life of the Vita launch party?

I can say with a fair degree of certainty that Uncharted: Golden Abyss is the most technically impressive game I have ever played on a handheld device. It’s epic, showy, and uniquely engrossing; the type of game most new platforms have to wait months for but the Vita has the good fortune to offer from day one. As a Vita launch title it is first-rate, but held up to the standards of the acclaimed Uncharted franchise, Golden Abyss has its fair share of shortcomings.

Let’s cut to the chase. Golden Abyss most resembles the original Uncharted title because they both share similar jungle settings and are purely single player experiences. The gameplay is the same mix of vertical platforming and cover-based third person shooting. In these respects it stays remarkably true to the previous games. Very little has been compromised in bringing Drake’s heroics to the Vita. Golden Abyss is more defined by the various ways the developers at Sony Studio Bend have added elements that take advantage of the Vita’s unique input options.

All the Uncharted games tell the same basic story. We join all-round macho man and wisecrack extraordinaire Nathan Drake on an expedition with a somewhat shady associate to track down the valuable remnants of some lost civilization. After multiple reversals of fortune, Drake finds himself squaring off against the private army of a megalomaniacal villain, in this case the disgraced General Guerro, who seeks the same treasure for private gain. This time around Drake is traversing with his old friend Dante, a snappy dresser whose whiny accent just screams “hate me”, in the jungles of Panama looking for Quiveran ruins. The game is divided into three acts, all of which take place in a similar jungle environment.

The other new character is Marisa Chase, a young woman searching for her missing archaeologist grandfather. She follows in the tradition of Drake’s past female partners in that her character oscillates between spunky go-getter to damsel in distress in an instant. The only returning characters are Drake and the always-entertaining Sully. Together they share some of the best banter I’ve heard in a videogame in a while. I’m of two minds when it comes to Golden Abyss’ storytelling. On one hand, the main narrative is utterly predictable despite the entertaining dialogue. On the other, the game uses a deep treasure system wherein you will collect various pieces of information to solve multiple mysteries. You’ll collect artifacts and take pictures to discover what happened to lost expeditions, failed conspiracies for revolution, and the secrets of a lost civilization. There are well over 100 individual pieces to collect in order to solve all of these mysteries and it really shows that the developers took the time to create a deep mythology.

Your response to the controls will ultimately shape your experience with Golden Abyss. Generally, the game controls much like the console versions. The X button jumps and handles other actions when it comes to traversing the environment. Square is primarily used for melee attacks, and Circle for dodge rolls and hiding behind walls. The left and right shoulder buttons are used for aiming and firing respectively. The first hurdles you have to come to grips with are the Vita’s dual analog sticks. It takes a few minutes to get acclimated to the amount of movement and camera control they provide. Once you get used to it, however, they become second nature and you won’t mind the subtle differences between these and the Dualshock control sticks.

Next to discuss are the various ways the touchscreen is put to use, which is much more hit or miss. When climbing and moving across ledges you can simply trace a path for Drake to follow with your finger. That this method works so well is quite jarring at first but you can actually play most of the climbing segments this way with ease. The standard analog and X button control combo is a reliable fall back, and even works better in the case of timing jumps, but ultimately it comes down to a matter of preference. The touch controls are also available in hand-to-hand fighting. Here, though, they fare rather poorly in the sense that it completely ruins the flow of combat we’ve come to expect from past Uncharted games. A fist icon will appear whenever you are close to an enemy and you can touch their body rather than press the square button to engage in combat. It works as advertised, but the biggest drawback is when it comes time for finisher moves; you have to perform these drawn out swiping motions across the screen. While simple enough to follow, they leave you vulnerable to fire from other foes, whereas in past games you could dispatch of enemies more expediently. Disappointingly, the two major encounters towards the end of the game amount to nothing more than overly long strings of swiping commands rather than proper boss fights.

Elsewhere you can use the touch screen to pick up weapons on the battlefield. The touch controls radically simplify hurling grenades at foes from long distances. All you have to do is tap the grenade icon then drag your finger to your intended destination and wait for the explosively satisfying results. Other uses for the touchscreen include using them to hack away at bamboo with your machete, force open doors, or give your partner a boost up to otherwise unreachable platforms. The Vita's Sixaxis motion controls is put to work when you have to maintain your balance as you walk across thin beams suspended in midair. The rear touchpad also gets in on the action. You can climb up and down ropes by alternating your swipes on the back of the handheld. When sniping you can use the touchpad to zoom in and out with ease. Finally, you’ll use the touchpad to simulate rowing down river with an oar in a canoe.

The puzzles often surpass those in the other games in the series. Golden Abyss provides insight into the more traditional parts of Drake’s profession. You’ll be doing quite a lot of charcoal rubbings to preserve impressions of important carvings onto paper by rubbing your finger across the Vita screen; physical artifacts will have to be dusted off with care by stroking the touchscreen; and there numerous puzzles will tax your mental ability, ranging from rearranging statues on an ancient game board, to unlocking combination locks, to reassembling torn maps and other documents. Most, if not all, of the puzzles employ the touchscreen in some fashion. Those that have been craving more puzzles in the series have had their wish granted. When it comes to the action sequences, Golden Abyss features the same sense of cinematic flair that the series is renowned for. There are impressively choreographed set pieces, replete with explosions, chase sequences, implausibly long jumps and intense shootouts. That being said, all the weapons are the same and when it comes down to it not much has changed concerning the shooting portion of the game.

The visuals in Golden Abyss stay remarkably true to the high quality established by the three PlayStation 3 titles. The animations, environments, lighting, and effects are all top notch. To the untrained eye it looks like the full HD console experience is running in the palm of your hand. The Vita’s 5-inch screen displays an unbelievably rich color palette that you can literally touch and in many cases alter what appears onscreen in real time. However, the graphics do falter in some respects. Up close, some explosions and gunfire appear quite pixilated. Golden Abyss would have benefitted from more anti-aliasing to counteract the jagged distortions that occasionally impair the high quality visuals. Additionally, there are infrequent issues with the collision detection that causes Drake to jump through both sides of a wall before settling on a definite plane of movement. Otherwise, the game runs smoothly with a consistent frame rate and minimal loading times. Uncharted: Golden Abyss is probably the best looking Vita game available right now.

The sound design has not been scaled back in any respect to fit the PlayStation Vita. Though it may get drowned out by the noise of your surroundings, if you take the time to listen closely you'll be rewarded with a deep audio experience. Nolan North’s voiceover performance as Drake is as stellar as ever. The small supporting cast bring the story to life as best they can, though a few of the performances become slightly grating before the game ends. The team have added sound effects for things most people wouldn't even think about; interactive elements such as the charcoal rubbings and cleaning old tools are made all the more immersive by the convincing sound. The musical score stays true to the adventure movie motif embraced by the series but comes complete with original arrangements that heighten the sense of tension during gameplay. For all of these impressive technical feats Uncharted comes with a premium price point. Whether you buy it at retail or download it from the PlayStation Store, this game will set you back more than any other Vita game. The adventure lasts about 10 hours for the first play through. Unlockable difficulties and an overabundance of hidden treasures offer incentives to play again, and in addition to the 55 PSN trophies the game has its own unique trophy system to reward your in-game exploits. The game is good enough that you won’t regret your purchase, but it would have been nice if there were more extras to play around with after the end credits.

Uncharted: Golden Abyss is strong on visuals, action, and flair. Some of the new control mechanisms feel forced to the detriment of the otherwise great pacing. It doesn’t fully measure up to the other games in the series but it's not that far off either. If you consider yourself a dedicated Uncharted fan, Golden Abyss doesn't demand you immediately go out and purchase a Vita in order to play it (especially so soon after Drake’s Deception), but if you already plan on picking up Sony’s latest handheld, it's good to know that your old pal Drake is willing and ready to show you the way around your incredibly versatile PlayStation Vita.

This review is based on a retail copy of Uncharted: Golden Abyss for the PlayStation Vita.