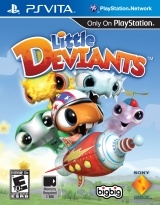 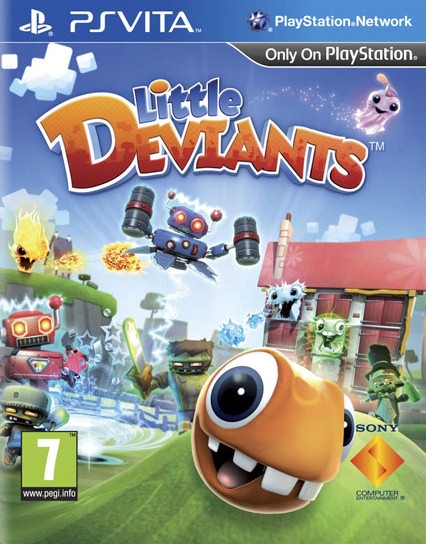 Just what the Vita needed

As the gaming generations pass and gimmicks such as motion control and touch screens become a system's selling point, rather than just another feature, every new piece of hardware requires its own launch software to show off its capabilities. The PlayStation Vita has a slew of fantastic features such as a set of touch pads, a camera, a microphone, and a motion sensing gyroscope, so there's lots to show off early in the console's life cycle. Little Deviants demonstrates each one of these features via a series of fun, bite-sized mini-games, and for the most part it does a great job! Since Little Deviants is basically nothing more than a tech demo, it cares not for straying far from the simplified, family friendly aesthetics that its forebears trailblazed in the years gone by. It certainly has some inventive gameplay, but when it comes to presentation it's a bare bones package. The graphics are charming and crisp but simple; the soundtrack is good for the most part, but nothing stands out; and the sound effects are decent but occasionally grating. It's precisely what you'd expect from a mid-range launch title. While the presentation is merely sound, its performance is actually pretty good; there are no glitches or errors, and the load times are brisk.

There is a story here, but as with the rest of the game's presentational elements, it's simply a means to an end rather than a focal point. The deviants – little gel-like alien things – are being hunted down by robot overlords and their undead zombie hordes. You help the deviants find the pieces of their ship so they can escape by altering their world through the various input features of the PlayStation Vita (at least that's my interpretation of what was happening). There are six worlds in total, each with five levels, and each level is its own mini-game. In many ways, its layout and gameplay reminds me of the Rayman: Raving Rabbids series. Each level has its own arcade-style leaderboard, both local and online. Unlocking new levels is achieved by achieving at least a bronze rating in every level, which means you need to get a certain amount of points to proceed. Getting a bronze is actually really easy on most levels, but the silver and gold ratings are much more challenging. In addition to unlocking new levels with a bronze rating, silver ratings unlock art gallery pieces and each level has a kitty (known as a Mogger) to find, so there are a host of collectables to find, even if none of them are particularly time consuming or deep. Little Deviants could realistically keep your attention for a respectable amount of time, which is good considering the $30 price tag. It took me somewhere between 5 and 6 hours just to go through the whole story mode and 'beat' all the levels, so I'd say the price is about right.

There are a few slip-ups – most notably in the later levels – but for the most part each and every input and gameplay feature works flawlessly, and to be honest it makes me very happy to see that Vita's hardware works as well as it does. The touch screen controls are very responsive and the augmented reality shooters and motion sensing games are flawless. Too often you hear about some revolutionary tech that just doesn't work, or isn't what you thought it was going to be - Vita is nothing new, but what it does it does well. There are around 20 different games in all. The one I was looking forward to the most based on the trailers was the one where you dragged your finger along the back touch panel to distend the earth and roll the deviant around, but it's quite awkward to do and not nearly as intuitive as I would have liked.

Some of the more interesting levels are also the most complicated ones: one of the mini games has you protecting a deviant in a hot air balloon, rubbing the back to make him heat up and give the balloon some air, all while protecting the balloon from birds by tapping them and patching up the balloon should it get a hole in it - I actually had a lot of fun with this one. Another set of mini-games has you tilting the system to roll your deviant around, like one of those ball-mazes you likely played in kindergarten. These mini-games, as well as some others, require you to hold your system at an odd angle, which makes them less enjoyable to play, but the tech is solid and the controls fluid. I think the most enjoyable ones are the augmented reality shooting games (ones that use the system's camera). You shoot enemies that appear to hover around in the real world, and spin the system around to aim. You actually have to turn your camera a full 360 degrees to get all of the enemies though, generally requiring you to stand up and keep your arms up for the duration of the level. I enjoyed a majority of the games, but there's no denying the game does drag later on. After about 2/3 of the way through, the games start being recycled. They're tougher and have a different coat of paint, but claiming there are '30 mini-games' in all is quite misleading - 20 is much closer to the truth. There were also a few rare occasions where the games are annoying or just don't work. One mini-game has you singing into the mic, hitting certain frequencies to destroy bottles and other objects thrown your way. It's quite annoying trying to maintain the proper tone long enough to shatter the glass, and I play expert vocals in Rock Band. The last world in particular features some pretty frustrating levels. Luckily, the unpleasant games are few and far between, and do little to diminish the fun factor of the rest of the game.

Little Deviants isn't anything special on its own, but for what it's worth, I enjoyed it. We all know that it's nothing more than a glorified tech demo, and in that respect it succeeds with gusto because, after seeing everything the Vita can do, I'm excited to see how other developers implement the features on show here in deeper, more engaging games.

This review is based on a retail copy of Little Deviants for the PlayStation Vita.