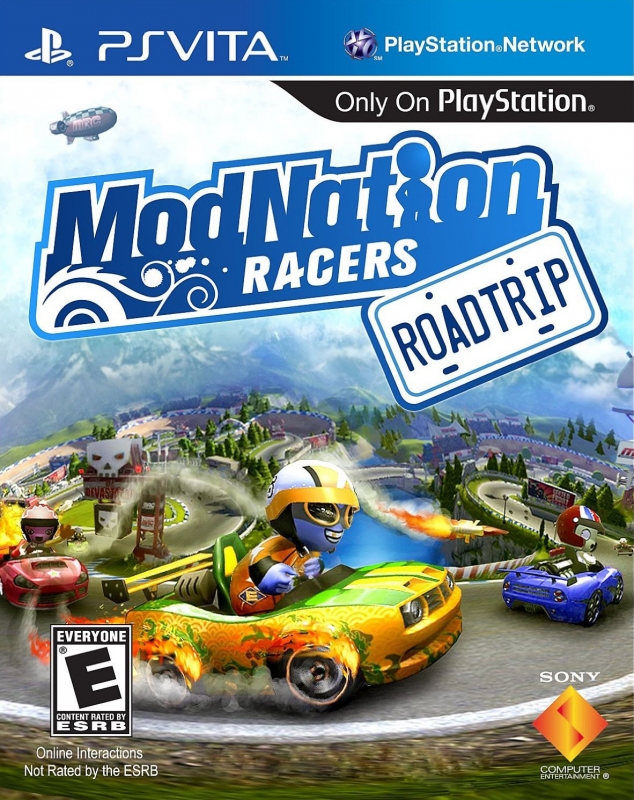 One major flaw short of greatness

I love the ModNation Racers series; its blend of cart racing infused with the play-create-share mantra introduced by Media Molecule's LittleBigPlanet is a great combination for me because I love to share my work with the world, and I've wanted to design my own race tracks since I first played Mariokart in the early 90's. With the promises of ModNation Racers: Road Trip being a console experience on a handheld, I was excited to pick it up. While I can confirm that they've followed through on that promise really well, there are a few minor issues and one glaring flaw that keep this entry in the series from greatness. Like earlier games in the series, ModNation Racers: Road Trip is an action kart racing game with emphasis on the creation and sharing of your own tracks, karts, and racers amongst the global community. The career mode is reasonably lengthy and plenty fun on its own, even though its primary purpose is to prepare you for the online features and inspire you to make some mods of your own. This career mode spans six circuits, each with five tracks. Each of these tracks has a set of 5 tokens to find and collect as well as a series of tasks to complete to unlock more modifications. Most of these tasks are simple, like getting a certain amount of a certain kind of points, or fulfilling requirements such as driving on boost pads or knocking down a certain amount of other racers, but each task is paired with an additional rank requirement, such as getting at least third place as well as 20 000 drift points to unlock the mods therein. If you're a completionist, the campaign mode alone could last you a dozen hours or more, especially considering the difficulty and complexity of the later levels, whereas if you're interested in just jumping into track creation, you can buy an unlock all code for a few bucks instead of unlocking the parts manually. Although none of the tracks have their own unique identity - they follow simple themes like a jungle level or an ice level - don't let that trick you into thinking they are poorly designed. Road Trip follows tradition by designing each and every track to be full of hidden items, traps, alternate routes and shortcuts, giving you an invigorating sense of exploration as you race. The tracks were also pretty long, so it seems that a lot of work was put into the level design and taking the time to find the optimal path and all the hidden items will be a lot of fun. While most of the tracks are simple, the later levels hate you and want you to fail at every turn. Littered amongst the tracks are pillars, moving obstacles, robots, and exploding barrels that are tough to avoid; couple this with the labyrinthine track layout and the fact that a single mistake could take you from first to last in a matter of seconds, and it could take you dozens of playthroughs on each course to even come close to getting that 3rd place minimum.

Perhaps the best aspect of the ModNation Racers games is the custom track creator, which has been refined and altered to utilize the touch screen functions of the Vita. This time around, the developers promised that you can make a track in minutes, and they're not lying; The basic controls are intuitive and refined, so you can use the front and rear touch panels to draw a track, alter the terrain, place some obstacles, and add some scenery. In only 15 minutes you can create a track that is fully playable and surprisingly fun! The basics are easy, but the finer aspects of the track creator require a lot more time and dedication and was less user friendly. As they say, anything worth doing is worth doing right, and if you want a memorable track you had better be willing to put forth the effort needed to make it worth the time of those who are going to download it. In addition to the tracks made by Road Trip owners, the existing 500 000+ tracks made on the PS3 are also available for download right from the get-go. And this is where I face my greatest dilemma in writing this review. While I think the game is very fun and the ability to create your own tracks is a godsend, the flaws are pretty major. The biggest and most significant issue is that there's absolutely no online play. You can share your creations online, but you can only race with friends locally via the Ad-Hoc features. There's no way to spin this as a positive and alone it's almost a game-killer. You can't make a half-decent game based on a community without letting users play together. In today's modern world where online play is a primary selling point, there's no excuse for a kart racer like this to be without it.

Aside from this glaring flaw, the rest of the game holds up pretty damn well. The graphics are on par with the PS3 version, the soundtrack is a surprisingly groovy set of tunes that I caught myself paying attention to more often than not, and the game genuinely does feel like a console game on a handheld. In the PS3 version, there was an actual story mode with voice acting and commentary that gave the game a sense of humor; there's no such thing here. No story mode, no commentary, just you racing a bunch of random nobodies. This is disappointing, but not a huge problem. The only other notable flaws I found were performance issues. There were some very minor frame-rate issues and screen tearing that I honestly don't think I'd have noticed if I wasn't paying special attention to it, and the load times are still much longer than they should be; not as bad as the PS3 version, but still worse than any kart-based game should be. In the end I'm torn in half about ModNation Racers: Road Trip. On the one hand, I thought it was really well done, with great level designs, plenty of options and unlocks, and virtually unlimited tracks and options for those looking to express themselves. The visuals and audio are on par with the console version and the fact that it's only 30 bucks for a portable game with this much content is just awesome. On the other hand, the load times are still annoying to wait for and the baffling lack of online play is a real killer in the long run. If they patch this up to include online play then it will be a truly great game, but as it stands it'll have to settle for just being pretty good.

This review is based on a retail copy of ModNation Racers: Road Trip for the Playstation Vita