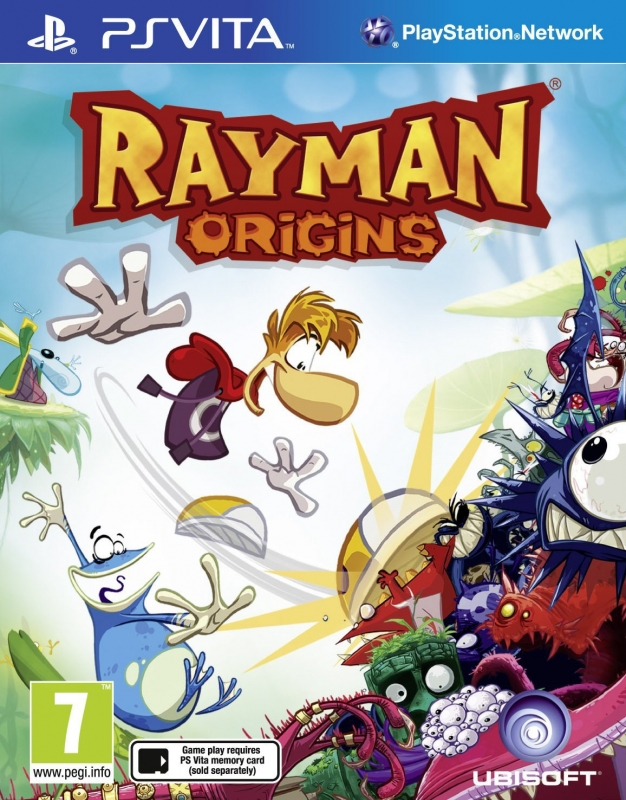 In spite of spending most of my early years playing games like Mario Bros. and Donkey Kong Country, I never got into the Rayman series. Sure, I've played Rayman: Raving Rabbids and enjoyed it for the gimmicky mini-game compilation it was, but I had no desire to check out the 2D platforming iterations that spawned it regardless of their quality. All of that changed in late 2011 when Rayman Origins came out on consoles and the rest of the gamrReview team was talking about it, peer pressuring me at every turn to buy it. Thanks to Skyrim and many other high profile games that came out that season, I was as guilty as many of you out there and just didn't have the time or money for Rayman Origins. As soon as I heard it was being ported to the PlayStation Vita as a launch title, I decided now was as good a time as any to ditch the excuses and just buy it.

I come to you humbled, feeling like a kid again as I discover a new favorite for the first time. I may have never played a traditional Rayman game, but that didn't stop an overwhelming wave of nostalgia from making my spine tingle as I experienced what was on display. Everything about Rayman Origins harkens back to a time when gaming was simple; plots were little more than a backdrop to set you on your way, and stuff like level design and controls mattered most. This game doesn't bother with filler or meaningless fetch quests to pad its length, instead it's just pure platforming bliss amidst a backdrop of truly gorgeous locales and a delightfully quirky set of songs and sound effects that are there to enhance your experience rather than distract you from it. While the jibberish narrative and other audio nuances are very nice, it's the multi-layered 2D graphics that really jump out at you. Each and every world is colorful and vibrant, made up of gorgeously detailed landscapes and easily the best looking sprite animation I've ever seen. I would have been happy with simple 16 bit graphics, but this is a showing of artistic merit that makes me think that, in the future, we can ditch polygons entirely and still have a wonderfully vibrant game. Not only does the game look crisp, the Vita's OLED screen makes the brights brighter and the contrast even more vivid than most HDTVs. When it comes to platformers, the two most important things to focus on are the controls and level design; luckily Rayman Origins excels at both. While you start off with a simple skill set for the early levels that require you only run and jump, throughout the course of the game you'll encounter levels wherein you free your fairy friends and as an act of gratitude these nymphs will grant you new powers, such as punching, diving, shrinking, or running up walls. Each of these new abilities is introduced to you at a perfect pace that gives you the time to get accustomed to it before thrusting another move onto you, so you never get overwhelmed and the levels are designed in such a way that you're trained how to use your new skills before you're expected to master them in order to survive. As an added bonus, you can also use the touch screen to zoom in on your character at almost any time, a feature exclusive to the Vita version. Even when zoomed in, the graphics are as crisp as can be; a true marvel for a handheld.

Each and every one of the levels is designed with a distinct amount of care and imagination that I haven't seen in the better part of a decade. There are 60 levels in total dispersed amongst 10 worlds, and each of these worlds has its own distinct aesthetic design. Not only are there some awesome themes to be had, such as a music desert world and an ice food world (don't ask, you really have to experience it for yourself), each and every world has its own unique identity, offering a new gameplay mechanic or design idea that is either introduced in that level or exclusive to it. Most levels are traditional platforming stages with gimmicks such as floods, water spouts, or retracting platforms, but there are lots of other game modes to mix things up a bit. Some levels have you simply chasing down enemies to rescue fairies, some levels have you running and dashing through an obstacle course with the only object being to finish the level with as many Lums as you can get, and some levels even have you flying about on a giant mosquito in a traditional sidescrolling shooter. There are also some pretty awesome boss fights, but they only happen in the second half of the game. As you're trekking through the worlds of Rayman Origins, you're going to be swamped with a lot of things to do. To proceed you have to collect a certain number of Electoons to pass any respective barrier; this can be a deterrent to some, but any avid platforming aficionado would have absolutely no problem getting all they need to continue. I played through casually and never had to go back because there are a lot of different ways to find Electoons. The traditional platforming levels offer you up to 6 of these little pink collectibles, whereas the event levels (shooters, bosses, chases, etc.) only offer three. Each and every level in the game rewards you with one Electoon just for completing it and two for finding a certain amount of Lums scattered throughout the level. If you're having trouble collecting Lums, you can use the Vita's touch screen to pop the bubbles that contain them as well as enemies to get more; you don't have to use this feature to enjoy the game and it's never forced on you, but for what it's worth I found it to be a really nice way of streamlining the collect-a-thon for those not wanting to go on a wild Lum-chase.

The normal levels also offer you one Electoon for completing its respective stage in Time Trial mode, which is awesome because the levels are made with such panache that they are perfect not only for exploration but also for optimized speed runs. Each stage has two hidden bonus levels wherein you can earn an Electoon by accomplishing simple tasks such as killing all the enemies or simply surviving long enough. Basically, it's everything you ever wanted in a platforming game. Not only are there Electoons to collect, but the normal levels also offer you a higher ranking for collecting Lums that awards you a badge as well as a higher time trial rank and award. As you collect Lums, in addition to unlocking the next world, you unlock hidden levels; completing these levels gives you a series of red gems that unlock the super hard bonus level at the end of the game that you're definitely going to want to play. In case you hadn't noticed, Lums are basically the coins of Rayman Origins, collectibles scattered throughout the level to give the player direction. What I'm trying to say here is that there's a lot to do in this game. Just completing the 60 levels on their own is going to take you a good amount of time, but to get all the Electoons, badges, time trial ranks, gems, and everything else the game has to offer makes this a hell of an impeccable deal at $40. My first run through lasted me about 12 hours total, and if I plan on getting everything, I fully expect that investment to double in value. Some of the levels are damn tough on their own without trying to get all the secrets; it's difficult enough that you're not going to be breezing through it, but forgiving enough that you're not going to be throwing your system across the room in frustration. There's a forgiving checkpoint system and a lack of any life system, so completing it is simply a matter of trying again and again until you beat it. Skill reigns here, though dedication is certainly enough to persevere.

There is one, and only one, problematic inferiority in the Vita version, and that is the lack of 4-player Co-op play. I, for one, am not too bothered by its omission, but I know that once a feature is implemented, taking it away is a bad move, even though the Vita version of Rayman Origins comes with some features to make up for it. There's the ghost mode, which has you racing against ghosts to beat sections of levels in the fastest time (this is slightly different from time trial mode), the ability to pop bubbles and inflated enemies by touching the screen (which I found helpful but can easily be ignored), and the option to zoom in and out. None of these additions are groundbreaking, but the reduced price and added freedom of portability makes up for the one major shortcoming of the Vita version. Overall, Rayman Origins is a testament to creativity when compared to many contemporary offerings. The art direction is unmatched and the level design rivals even that of my all-time favorite platforming titles. I may not have the kind of attachment to the Rayman character that I do to Mario or Donkey Kong, but based on the virtues of this title alone, I am certainly going to be doing all I can to keep up with this series from now on. My recommendation is to get this game any way you can; the episodic nature of platformers compliments Vita perfectly, but if you don't have a Vita or are particularly keen on co op, pick it up on consoles. If you don't have this game (and the sales show you probably don't), then you need to remedy that now.

This review is based on a retail copy of Rayman Origins for the PlayStation Vita.