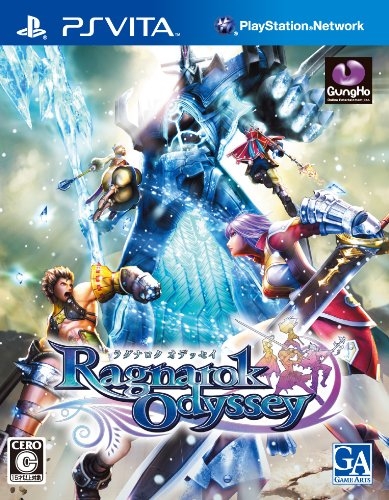 The Playstation Vita has endured plenty of criticisms through its first year on the market, and amongst them is the claim that the handheld doesn't have that must-have killer app that will get gamers worldwide excited to get or have one. The Vita's predecessor – The PSP – had Monster Hunter, but with that IP migrating to the 3DS, the co-op RPG hunting game genre is left under-represented. Ragnarok Odyssey attempts to fill that void nicely, giving hunters and mercenaries plenty to do for its 40 dollar price tag. It's still not that killer app the Vita needs, but that's not to say it's not worth your time; Ragnarok Odyssey is a lot of fun, and it will keep you and up to three friends busy for weeks if you have the gusto to get through it all.

Ragnarok Odyssey blends together Norse mythology with all sorts of JRPG tropes as an excuse to beat the hell out of dozens of enemies and massive bosses. There is a story there about a wall separating the Sundered Lands from the hordes of enemies and titans that threaten to attack the citizens and the mercenaries who protect the people, but it's all quite rudimentary and doesn't really give the player much depth to explore or discover. Most of the game takes place in the hub world, which is the avatar's home base where you buy potions and equipment, prepare yourself for battle, choose missions, meet up with friends, and dispatch out to the various locales to meet up with the waves of orcs, giants, and bosses that threaten your people. Each and every ally and merchant that you meet in your home base has a distinct personality that evolves over the course of the game, though this is such an insignificant detail in the grand scheme of things that it's easy to overlook entirely.

While the world is pretty simple, there are a lot of missions to go through. Some are pretty simple and straightforward instances of clearing out a zone of monsters, but as you progress through the nine chapters of the story, the fights become harder, the enemies get tougher, and the bosses get bigger and badder. There are almost one hundred story missions in total, as well as dozens upon dozens of bonus missions on top of that, each of which will take you up to thirty minutes to complete. Many of these missions incorporate a boss of some sort, and I'm not hesitant to say the boss fights in Ragnarok Odyssey are easily some of the most fun battles I've encountered in a video game in years. Bosses require either strategy or teamwork, and it's a rewarding experience due to the fact that there's so much to keep in mind and so many ways you can die. In addition to the typical move set that requires a certain pattern and persistence to evade, most bosses also have weak points you can lock on to in order to 'deal massive damage' or destroy armor, releasing extra loot. You can either focus on just killing these bosses or take the time to strategically cut each piece of them off until they're naked and exposed so you can head in for the kill. Quite frankly, this is what a boss fight should be, and the time you'll spend beating these behemoths is a lot of fun, to say the least.

Not only are there dozens of bosses with different strategies and patterns, but there are also 6 classes to play as, each with distinct play styles. There's the Swordsman, Hammersmith, Hunter, Cleric, Assassin, and Mage. Each of these classes is unique to one another and feature their own combo attacks and abilities to master, but you can switch between them in-between missions if one isn't working for you or isn't effective enough against a particular boss monster. As the cautious type I started with the swordsman, and when I realized that wasn't working for me I switched to the cleric. Because of this I initially thought the controls were sluggish and poor, but once I changed to Assassin on a whim, I came to realize this was a design choice, not a flaw. Of course the cleric - who has great defense and healing ability - is slower to move and attack since his focus is on healing teammates. The more I played, the more I came to realize just how intricate and well thought out the combat and character controls are in Ragnarok Odyssey.

Each class has its own group of unique combos. While most of them follow the same variation of circle and triangle presses, there are subtleties to each class that help to differentiate them for eachother. The hammersmith, for example, utilizes holding the circle button at certain points in the combo to charge up or extend his damage output for more strategic planning, while the mage mixes up swipes of his staff with spells and explosions for area of effect damage. There are also important combat details like blocking, running, and dodging which take a lot of time to master. In addition to combos, there are also subtle visual and audio cues that tell you if the location you're hitting or the combo you're using are effective, not to mention the reticule will tell you how far and how close to a stagger an enemy is. In short, it's clear that Xseed put a lot of work into the details of the combat system.

While there are over a hundred missions, they do get a little repetitive and overlap one another frequently by requiring you kill similar types of enemies in similar areas. There are only a dozen worlds to fight in, and while each mission slightly mixes things up by only unlocking certain parts of each world in each respective mission, there's still a lot of repetition. It would be fine if the worlds were bigger or allowed you more freedom to jump and explore, but instead they're simple and disappointingly restrictive. Early on I was worried that Ragnarok Odyssey was too repetitive for my tastes, but the more I played the more I wanted to play. As I grew stronger with each passing chapter, getting and upgrading new weapons and getting new cards, the compelling nature of the grind captivated me and I had to 'beat that boss' or 'finish that chapter' or' buy that new item'. It may have been repetitive, but I was definitely hooked.

What makes Ragnarok Odyssey so compelling and, dare I say, addictive is its level up system. There is no traditional system in place where you kill monsters for experience to level up, gaining skills and abilities along the way. Instead, you kill enemies for items which can be used to craft or upgrade equipment. To get stat bonuses or special skills you have to equip cards onto your armor, which can be upgraded to include more slots for more cards as time goes on. These cards can be simple stat bonuses like attack or defense increases, but they can also give you special skills that make you immune to knockback or any other of the game's status ailments. I wish there was a traditional system as well, but the loot and crafting systems are a lot of fun to play with and are great for enticing you to play 'just one more' mission to get the items or cards you want.

To be honest, the game is enjoyable when playing on your own, but it really comes into its own element when you're playing 4 player co-op online or ad-hoc. Since there are 6 classes to choose from, getting a team that's perfectly balanced and varied with mages, assassins, and clerics is a blast and offers the same camaraderie that a proper MMO can give you. Online is pretty stable, providing the players all have good connections, and the communication system is decent (there's a chat room that you can bring up at any time by pressing on the touch screen), though I wish you could use the mic. In fact, the touch screen plays a pretty significant role in the game as a whole; you can use potions, expand on the map, or go into Dainsleif mode, which gives you huge boosts to all your stats and makes you immune to knockback in exchange for a steady HP drain, so be wary when using it.

Graphically, it's about what you'd expect out of a Japanese ARPG. The character models look like they were ripped right out of an anime, and the landscapes are all pretty basic, even though they make wonderful use of lighting and effects to set the mood. The soundtrack is also a standout, since it is oddly reminiscent of Final Fantasy XII. I got an actual soundtrack disc with my copy of the game and I've been listening to it pretty regularly. Above all else, I haven't encountered a single glitch or audio problem in the 50 or so hours I've put into the game. Even when there were dozens of enemies on screen attacking with hundreds of digits and numbers exploding off each and every one of them, the game doesn't dip in frame rate and continues to look great, albeit relatively simple.

We're not looking at a system seller or killer app here, but Ragnarok Odyssey is an effective and fun action RPG for any owner of the Vita, and definitely worth your money if you have even the slightest desire to pick it up. Valhalla awaits.

This review is based on a PlayStation Vita copy of Ragnarok Odyssey.