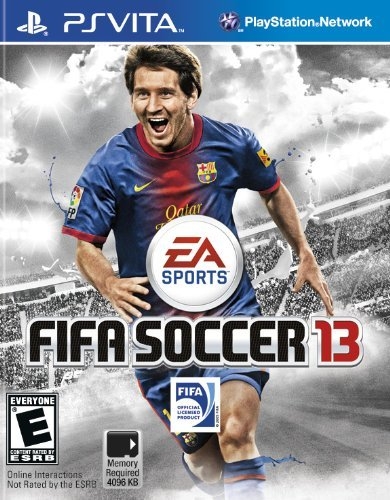 One common complaint leveled against yearly sports games is that they make few changes between releases yet they manage to maintain their popularity and generally stay in the good graces of critics who understand the more nuanced tweaks that go into a new game. However, sometimes the complaints are completely justified, as publishers shamelessly release the same game disguised as a new iteration. Such is the case for FIFA 13 on the PlayStation Vita. The game is virtually identical to the shrewdly titled FIFA Soccer, released during the launch period of the console only a few months ago.

FIFA controls on Vita have already been established by the previous iteration but, for the uninitiated, there are several touch control inputs unique to the handheld. You can pass and shoot using the face buttons or you can use the touch screen to pinpoint exactly where you want the ball to go. The rear touchpad can be used to take shots at the goal as well. The accuracy of these mechanics has been somewhat fine tuned for this newer version but they are still less intuitive than utilizing the traditional control methods. I found it too easy to overshoot the target using the rear touchpad and passing with the front screen briefly obscures the action on the pitch. Nonetheless, everything works as advertised and playing FIFA on the go with dual analog sticks is a real pleasure.

There are no new game modes. Ultimate Team and Football Club are still conspicuously absent, though both could feel quite at home on a sophisticated handheld like the Vita. Instead, you get the same combination of Be a Pro, Career, and Tournaments to play through. All are as fun and as in-depth as you remember but there is nothing new to explore or experiment with. Playing the Career mode, which by its nature involved going through a ton of menus, I realized the user interface needs to be less cumbersome and would do well to incorporate some touch screen functionality.

On the pitch, the game goes back quite a few years. There is still no sign of The Player Impact Engine or Tactical Defending features being integrated into the gameplay. The attacking intelligence and dribbling systems are also left unchanged. The game cannot help but feel archaic, playing more like a portable version of FIFA 11 than 13.

The visual presentation goes nearly unchanged. For the most part this is just a reskinned version of the previous game trying to hide behind a slightly revamped menu. The game runs a bit more smoothly and there are less jaggies than its predecessor, but it still feels as though there is a ton of graphical potential to be mined. The character models and animations are adequate but could look much better. Replays, though, are a real treat to play around with and watch, manipulating the camera to find the perfect angle then snapping a screenshot for your personal enjoyment.

Sound is an underappreciated yet vitally important part of the FIFA experience. The commentary, provided by Martin Tyler and Alan Smith, is still first class. The soundtrack is disappointingly limited to only five tracks for some inexplicable reason. There is nothing to fault concerning the in-game sound effects, though, which can really draw you into the experience if you take the time to listen closely.

In terms of value I have no choice but to condemn this game in the strongest possible terms. To release what is essentially the same game a mere seven months after its predecessor at full price with no significant improvements is utterly shameless. Of course you get can many hours of play time out of this experience but it is all superficial and uninspired without any significant new features propelling you forward. You can always hop online and enjoy competitive head to head matches and participate in leagues to your heart’s content, but the matchmaking still needs work and the depth of options lacks parity with other versions of the game. The game does not constantly update the stats of players to reflect how they play in real life and all the challenges to recreate actual occurrences from matches during the season are also omitted.

The hardest part about writing a negative review for FIFA 13 is that it is not a bad game per se. In fact, I enjoy playing it quite a bit and consider it to be a great portable interpretation of the sport. The problem is that the game, already in its second iteration on the PlayStation Vita, has shown no signs of evolution or willingness to change, making it feel stagnant when compared to the exemplary HD console versions and even its own predecessor on Vita. If this is your first soccer game on the Vita you should go ahead and buy this version for the updated rosters, if nothing else. However, owners of FIFA Soccer should stick with the game that has been available for months and hold out until next year’s release, which will hopefully usher in more meaningful and necessary changes.

This review is based on a review copy of FIFA 13 for the PlayStation Vita, provided by the publisher.